On my S22 Ultra the “Smart Suggestions” text comes from the Title text, not sure what phone they are testing on? And yes, the word “On” is always blue! And they are using the Sub Text color as the background color for the suggestions! WTF? There is no way any theme could be approved with the problems on this screen.

However you are correct in that there are a ton of issues that Samsung isn’t fixing… maybe that’s why support is offline, they don’t want any nbew problems reported!

I have a theme rejected again today… it worked in A10 and A11 but has failed 10+ times trying to convert to A12. I started converting this theme in Feb and they still find new screens to reject.

And the biggest issue to me is that the testers and their management find the most obscure screens that no one would use to test, and they know the app or GTS is faulty, but they reject our themes. So they know there is a bug but they reject anyway. In your example above, they have to know this is a bug, so they chose to test and reject your theme KNOWING you cannot fix this.

I think Samsung forgets that we actually PAY THEM. Yes, they provide the software and the means to sell, but they collect a lot of money from us! They forget that in additon to phone customers, we are customers too!

They are usually testing on S21+ and on S21 Ultra, I use Z Flip3. Seems like on these devices (on my own too), it doesn’t come from the title text color, as it should. I just checked all my themes, including themes that have no black color, and the “Smart suggestions” text is always black. Also, the back button next to the text is always grey and, as we said, “on” is always blue.

This happens when you have a web theme tool that is constantly in “eternal beta”. Basically they don’t bother checking all possible bugs for a serious release, they just release a version and oops! release again and oops another one! …endless fixes. They treat the GTS like a web page. The PC version had been taken much more seriously because fixes could not be done “on the go”.
They thought it would be easier and more dynamic, to have quick to update tool, without the download and install hustle, but we got the exact opposite result.

Each Tester from the Validation Team gets a random Selected Screens which must be Test, if there an visible Issue it gets rejected.

But of course it sucks, the Issues can be corrected within few minutes and also avoided if the App Development Team will be corrected Development and dont change a Color String with an New Update, that make no sense. I hope so much they do it better with One UI 5.

I should like this, if the Visibility Check finds no Issue due the Export, then should the Theme not rejected of an Visibility Issue. And its really sucks that the Support is not available.

@r.liechty_SDP can you forward these Suggestion with the Visibility Check? 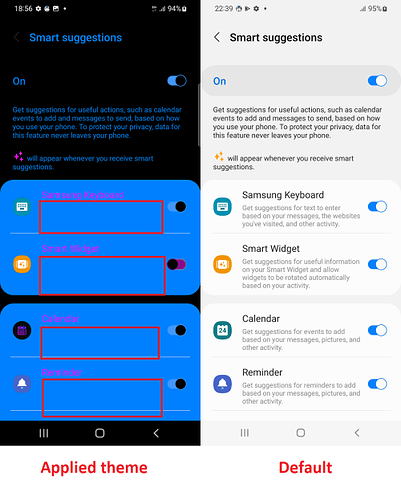 I tested it with the latest GTS, on an A12 device with the latest firmware, and only the “Smart suggestions” text being black is the problem. This issue right here doesn’t make any sense, it doesn’t appear like that on my device.

This is how it’s on my device: