I use a font (“digital”) on text appearance. I save my project, close WFS. But when i open WFS, with my projet, even if i see my font on text appearance, it is not the one i use. It is no more digital but it is the name of my font (difi.ttf) in selection . How come ? what is wrong? 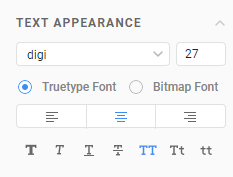 I use a font (“digital”) on text appearance.

The last I knew you have to install the fonts in order to use them. Simply adding them to WFS project does not work.

I can’t find my notes about this I can verify this if you tell me how you are adding them to your project.

I download free font to a directory in “my documents”. then i add it i WFS in text appearance . Then after, for other purpose i install it in win10. Buy the way, i cannot delete it in WFS.

Try moving it to the same workspace that your project is located.

I tried Workspace\Resources with font.ttf located there and it worked for a Beta version but I didn’t try it for anything after that. I added the Font after moving them but that may not be necessary.

If that doesn’t work, I’ll see if I can get better instructions.
Sorry this is a Holiday week in the US so I’m not working a lot or hours this week. Otherwise I’d be more helpful.

I put it in my workspace, and just in case, i install the new font in wondows too. Close WFS and reopen it and seems to be fine. But i cannot delete the unwanted font in that face.

Thanks! Hope you going to have a good Holiday.

But i cannot delete the unwanted font in that face.

I remember now I couldn’t remove the bad font either.

If you want to experiment make a copy of your project . Rename the file to .zip and open it. Remove the bad font from the resources folder.
Zip it back up
rename it back to wfs
and see if that removes it. It worked with GWS but I never tried it with WFS.

no, it does not work. It says invalid file. Nevermind, it is only in this face, i live with it. Maybe in a future update, there will be an option to delete font.

Thanks for your help

Thanks for letting me know. I’ll try to keep this in mind if anyone reports a similar problem. And I’ll report not being able to delete the font is a bug. 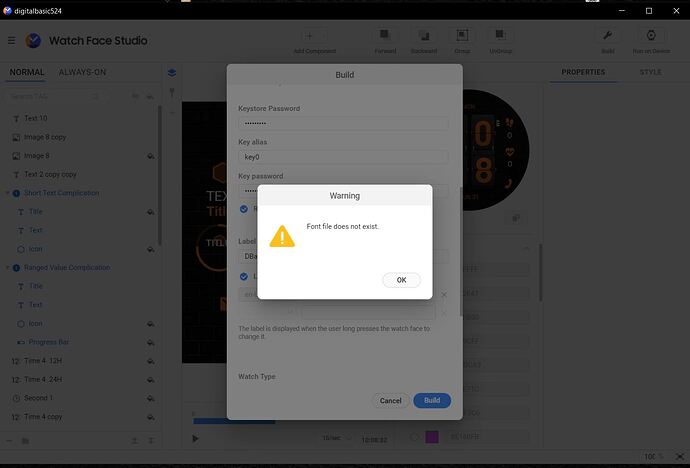 I did that it didnot work. I added the same fonts again and selected for each text that worked for me.

Hi Osman,
First they have to be TTF not OTF and I’m pretty sure fonts designed with a Mac will not work on Windows.
You have to install the fonts into Windows / Mac
Put the fonts or an alias to them in a folder in the Workspace folder where the project resides and select the fonts from that folder.

This process worked for me twice and before I did it that way I got the font file does not exist.

I got it the error one time in one project after doing the install etc. but I had a text file that used the old version still and had to remove the text add it back in and change the font to the new font.

Hi, i have been using TTF fonts but they were not stored seperateĺy in workspace folder.

I will try this to copy the needed fonts in workspace and then add them , çompile and generste build and then see if the Label blank issue works

Yes by adding the font again to text layers fixed no font file font on such wfs projects.

No suggestions here worked!
What worked was to look for the dump file or execute WatchFaceStudio.exe from command line.
Dump can be found with the help from this post from " [r.liechty_SDP]":

Look in the main.log file and it should say what image was not found. The dump file is not with WFS nor in the Workspace folder but in Windows : C:\Users{User}\AppData\Roaming\watchfacestudio\dump\main.log macOS : /Users/User Name/Library/Application Support/watchfacestudio/dump/main.log Ron Samsung Developer Relations

In there you should find where the Studio was looking for the ttf font, just rename and copy your ttf font in there and it should build on your watch, still no correct font in the preview, but it’s OK.
Better this than nothing!

Nice try, but that didn’t work. Still won’t show up when choosing a font. Any fonts I add, the program doesn’t seem to see them.

You have to install the fonts in Windows and have the fonts or a shortcut to them in the workspace (or a searchable folder) as well.

Thanks for the reply RON, but I can’t seem to find the “WORKSPACE” folder for WFS(ver 1.2.5). I know there is a folder named that for GWS. The fonts I want/use are already installed in the FONTS directory in windows. I don’t know what to do at this point.
In the previous version I could goto AppData>programs>WFS>resources>src>render>res>fonts., but putting the fonts there didn’t work either. This new version doesn’t even have those folders. I am stumped at this point.

hanks for the reply RON, but I can’t seem to find the “WORKSPACE” folder for WFS(ver 1.2.5)

It has been a while since I installed WFS but I thought it was set up when you installed Watch Face Studio.

C:\Users\USERNAME\WatchFaceStudio\Workspace
It is the folder where your project resides. Wherever that is.

I had to open the fonts folder in Windows and then create a shortcut which goes on the desktop and them move that shortcut to the same folder as my project is in.