I tried to do it, I even did it and respecting what is requested. But I always get error saying it is not compatible.
360x360 dp??? Or 360x360px?
360x360dp is how many pixels?
Does the build configuration have to exact as it is requested?
Has anyone managed to do it? 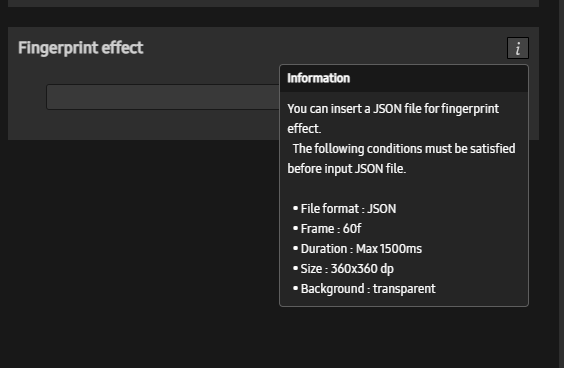 Same here, whatever i do, it won’t works

I found your post trying to figure this out. Anyone have any luck?

Same, created animations with after effects, exported to json files and all rejected by gts though they work fine in other render tools.
So please why don’t create a step by step guide on ytube tutorial since those specs are not clear enough --OR the thing isn’t working at all and just rejects whatever you upload for no reason

alblang, are you using bodymovin plugin? its what i tried. I was really excited to have control over how the fingerprint image looked. this is really disappointing.

I’m using the other one: lottie plugin, on AE 2019, so we can confirm the issue is not exclusive of a particular plugin

I though Lotte Json should work, there are also many examples in the web, but none of them are working

@r.liechty_SDP is it possible to provide us a tutorial, how it is working?

well, i guess we wait for a tut or something. i feel like im wasting too much time on this.

Has anyone managed to publish any .JSON in GTS?

Not me. I would love a tut on it

I haven’t played it yet, but noticed px changed. Is it a typo? 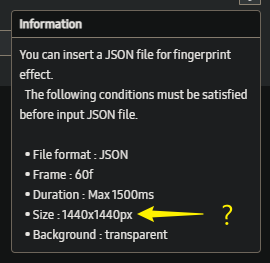 Im using!!
you should make your json animated file as described

I sent some themes, now just wait if they will be approved.

yes, its the same here! I don’t have a phone with android 13 beta to do tests. ~I think that the animation will appear only when the unlock occurs.

I was making the fingerprint. then it was pointed out to me that this is just for the special effects that happen when you press. (Credit: Steve from our designers facebook group) like the default ripple effect.

Just like you guys… i would have liked to see/test it on a phone.

I was making the fingerprint. then it was pointed out to me that this is just for the special effects that happen when you press. (Credit: Steve from our designers facebook group) like the default ripple effect.

Ron, can you please confirm this? Thanks.