The first time this theme got rejected, the problem was related to the fold devices, so I removed them to see if that was all, 14-15 days later it got rejected again with a new issue on something that wasn’t mentioned before

Here’s an image of the defect, the preview and the file on my computer.

As you can see there’s no problems on the preview. Reducing the icon size could fix the problem, but that’s not ideal. 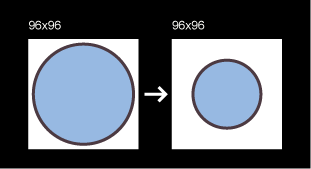 I can’t guarantee that reducing the size of the images would solve anything, I didn’t had this problem with my other theme and they got approved, but it was released a few months ago using another version of GTS, it was before the 2023 ver. The other theme’s icons were used as a base when I made this one.

The main problem here is that it looks like that after too many days, if the reviewers find a single problem they end the test, reject and report instead of reporting all the issues at once. It wouldn’t be so troublesome if the review process didn’t take so long or they would report all the problems at once, but like this it is impracticable.

I might try converting this theme to 2022 to see if it works, I don’t really feel like removing these Icons. That and I’ll probably stop changing every single icon that I can change for my next themes, if it get’s rejected for a reason like “You didn’t change every single thing”, there’s not much I can do about it if they don’t work properly.

For reference, this is the post I made when this theme got rejected for the first time.

Hi, I just got a theme rejected and I don’t know for sure what I’m supposed to change to fix it, visibility check on GTS couldn’t find the issue that has been reported. This is what I changed so far to see if it can fix the issue Common> Color > “Primary Color” Common> SmartTip> “Background Color” This was the Review Result Report that I got before I did the changes I mentioned above: [1_AT_20221028_113429_multi] [Defect] Drop of readability of button, icon, text. *Settings version: 1…

The radio button is 96x96 but to my knowledge we have never been able to use all of the pixels. Just reduce the size of the layer with your image to about 70x70 and it will pass.

And you don’t have to change every single thing. If you don’t use an image for radio buttons and check boxes it use the primary color.