Lately, I’ve been having rejections that have to do with the reviewer’s aesthetic criteria, subjective aspects or graphic conceptual interpretation that the reviewer perceives, followed by a whinsical cause of rejection. Looks like someone is obseseed with the idea that the square (FOLD) backgrounds should be “almost identical” to the vertical screens previews. AKA symmetrical designs. Remember that fold’s butterfly wallpaper? They want more like that, apparently.

I tried to explain a couple of times that (obviously) background images will look different on square screens because the previews in the Themes store are for vertical screens only, but that’s the theme store’s thing, not ours. I also try to explain that in design there is something called “asymmetry”.

I can’t create a 2nd preview for fold devices. This silly situation is being more and more frequent and I would like to know whether this is a paticular reviewer opinion or a bunch of testers are doing the same. They can see all our seller information and point us, marking us, but we have no idea which reviewer rejected/approved which thing and the reasons**. We have no way to track who rejected and who approved.**

I’m updating approved items without changing design, just updating binaries, but now X tester decides to reject it. It was already approved bro, what the frick. How can I know which of the testers approved or disapproved my theme --perhaps they should have a chat to make sure they’re on the same page before deciding to approve or reject.

I am seing more of that too, it is getting out of control. The tester’s personal tastes are being used to reject themes! I saw one rejection where the tester didn’t like the switch design, even though it was great. The track was too narrow they said! That is not for them to decide.

And I’ve completely given up on the Fold. There are so many problems with the apps and/or firmware that they should never approve a theme for the Fold. But they do for some? It’s wasting my time to try and get a theme approved so I’m only doing about one a month now.

The testing debacle is very sad

Looks like someone is obseseed with the idea that the square (FOLD) backgrounds should be “almost identical” to the vertical screens previews.

Not to mention that it is nearly impossible to design wallpaper that will look good and fit on both an inner screen that is 1768 pixels wide and the cover screen that is 832 pixels wide. And at the same time, the store still shows preview screens based on the Galaxy Note 7 !!!

Happened to me too. The wallpaper was designed only for “normal” smartphones, the edges of the wallpaper outside the screen had one simple color. They rejected it because on Fold it doesn’t not look like in the screenshots. Well… d’ooh, one screen has the width twice bigger than the other, how can they look the same, also while there are no screenshots particularly for Fold?! Solution: removed Fold from the device list.

Developing wallpapers/lock screens that include Fold devices became important because actual themes are impossible to get approved and I decided to give up, completely. No more wasting my time in themes for FOLD. It’s an impossible mission, they always get rejected due to “visibility issues” that we can’t fix using GTS. Bugs that only Fold UI have and they are not fixing them, I don’t think they’re even trying, to be honest.
My only hope is that the Fold owner at least can download a wallpaper and probably an icon pack, don’t know. So sad.
#themes #FoldIssues

They just rejected a theme for the thing we were talking about here, and they tested it on Fold2 while I already removed all Fold versions from the device list.
As a matter of fact, this is the reason I removed Fold to begin with: because it was rejected a few weeks ago for this exact same wallpaper issue.
This is just unbelievable…

Yes I remove fold from target devices only when submitting a theme. Not when submitting wallpapers, icons and aod so these are available for fold. That way I break a theme in separate items and fold users can download the backgrounds, icons, separately and get “like a theme”

I also write a line in the comments IN ALL CAPS when submitting a theme to make sure they understand that fold is EXCLUDED.

I usually give one try with Fold, and if it gets rejected, I remove it, which is what happened now. But I guess I’ll do the same from now on and also notify them that all the Fold versions were removed from the device list.

So to give you an update on this, they finally approved and published my three “assymetrical” wallpapers, even for FOLD devices, after a little whining I wrote in the comments area when resubmitting. I just had to elaborate the idea a little but didn’t change anything of the design, and didn’t exclude fold. Thank you reviewers, you’re the best

LOL reviewers are the best? This is the second time they rejected my theme for this… even though I removed the Fold binaries and asked them not to test on the Fold TWICE. The best at not reading comments? The best at rejecting themes for known firmware app issues? The best at supporting the commerical sellers and ignoring indie sellers? The best at making it pointless for indie sellers to submit new themes? 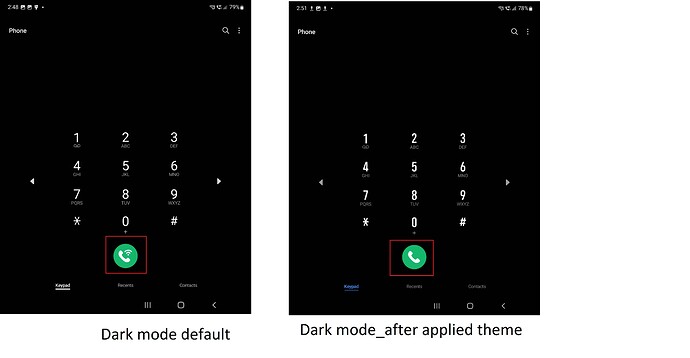 Yes, I was being ironic. It’s terrible. Sometimes I think they do it on purpose or there is a quota of approvals for small sellers. For example, I only get 1 theme approved per day, even though I have 14 queued, which I submitted all at once.
I still don’t understand why they test on fold when it’s excluded from the binary list.
As I discussed earlier, we need to know who the reviewer was on the rejection reports. That way we can identify them when contacting support. Perhaps the reviewer is not fully trained for his task and has to be notified of the errors he is committing

Prepare for a brand new wave of rejections for the teeny-tiny unimportant visibility issues of the small icons next to the notifications in Notifications > Advanced settings - Notification history.

Is that this one, or something new? If this one, they are supposed to be ignoring it. 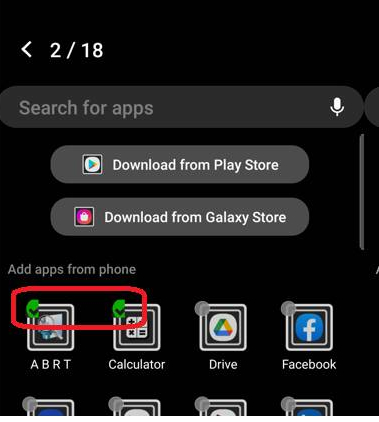 It’s a new one, that I’ve never seen before. The icon’s image can be changed with Common > Background > Background, but it kinda ruins the colors of the theme in some apps, like in Calendar. I can’t figure out where the other color of the icon is from. In one theme, it was a color that I wasn’t using. It seems to be another menu just like Smart suggestions, where some colors are simply fixed, like the background being permanently white. 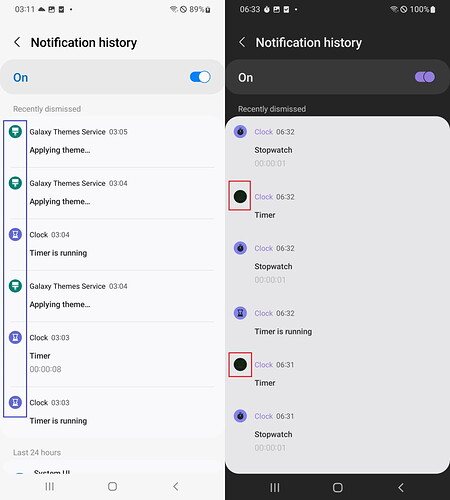 I checked more of my themes. The other color is always either the original green or a dark shade of green that can be seen in my picture here.

On my phone (S22 Ultra) the background is always white! I noticed on a theme I use that I can’t see text or icons!

But, the perfect example of why they need to improve their processes! As soon as the testers see this problem (because they all know it’s a problem, they reject a lot on this screen), they should notify management who passes it along to the team responsible for this screen. Then that team sees that the background is always white, and the other problems, researches them and develop a fix, either firmware, app or GTS. But no, they just reject everything even though we can’t fix this!

It does appear to be a tool issue, so we need to open tickets and get them to fix this screen.

The problems on this screen: