HELP! Where are these colors pulled from?

Ever since the latest updates I am receiving this same failure on all of my themes. But I can not find where they are pulling these colors from.

I know where the text colors are from (which I don’t know why that background is always white when it should be colored) but I can not figure out where the colors for the icons themselves are pulled from.

This theme is completely black, grey and white and has NO blue or green (that’s a green not black on the third icon) selected in it anywhere at all. No where in the Theme Studio do I have blue or green anywhere.

The icon themselves seems to be pulled from the background color, but even the HEX code used for that first blue grey is not a color I have anywhere in my theme?

any help is greatly appreciated! 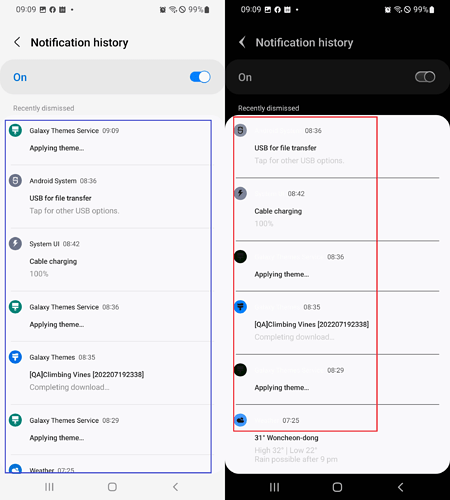 I had the same issue reported in a recent validation test. I also reported it through the inquiry thingy but have yet to receive an answer.

As you stated, I also told them that the background is always white, the subtext/secondary text is always black and that the circle icon colors sources are nowhere to be found in the actual theme.

You can’t fix the icons, this has been a common problem for weeks now, and was reported weeks ago. With three tool updates in three days I was hoping they fixed this, but no

Your Main Text Color is white though, make it D7D7D7 and at least you will be able to barely see the “heading” text that’s not visible in your example.

I just checked… it was first reported to Samsung as an issue we could not fix on June 27 !

Hello, thank you for your response. Yes sadly I am aware that very light colors will not work for a while so the white text in this theme has been changed when resubmitting.

I can’t believe with all of these “bug fixes” versions rolling out week to week that this issue still has not been addressed. You would think they would want themes to be submitted to the store so they can make money.

Glad to know i am not going crazy not being able to find those other colors though! I just attempted changing the background color (the one the icon seems to be pulled from, not the background) in hopes to see if that will get these themes passed. I can let you know if this works.

Nearly a month with no fix from them, what a shame.

Please be patient, they were working hard on the WeChat login and they’re exhausted

Does somebody know whether they’re out on summer vacation or something similar, maybe an extended national holiday …not even an email response to us. I’m not saying that they fix the problem, but at least an answer
#galaxy-themes

That’s a great question… they didn’t even bother putting out the July promotions! All promotion banners still have themes from the June submission! Seems like a lot of their groups may be on vacation.

I would assume they are not on vacation. They still approve or fail our submissions daily (all failed for the reason above) and last time they were on vacation and I had submitted a ticket they sent an email back letting us know they were on holiday but this time they just keep sending the “we received your ticket” email. So I have no reason to believe any of them are out of office for any holiday or vacation.

I have been able to strong arm some themes through approval by either lightening or darkening the Background color quite a bit. Basically taking the rejection image they send and testing lightening or darkening the existing Theme Background color over that image until it makes a visible icon. Not the best solution but if you are in a pinch it may work for you until they fix this. Only thing to keep an eye out for is making sure your Calendar numbers are still visible over your now lighter/darker background color.

The Icons are ActionBar Background and the Symbol are Common Background, but it should fixed with August Update

I had apps fail today for the same issue. My work around has been to exclude the fold from my app updates. That is only device that seems to have the issue. What Samsung should do is give us a theme editor for that device only since it seems to be so different from other devices.

I opened several tickets lately because themes fail on the Fold but work on the S22, and they said they won’t make them the same.

and they said they won’t make them the same.

What does that mean? I don’t get it

Sorry… it means that you can develop a theme that works and looks great on the S22 (for example) but it can still be rejected on the Fold. The color schemes they use on both devices will be different.

An example is the Calendar app - on the S22 Ultra, the “Calendar > Menu” background uses the GTS application background color, so the icons (SUB TEXT COLOR) are visible.

On the Fold2 that the testers use, the “Calendar > Menu” background is pulled from the button background color which means the icons can be the same color as the background.

On my ticket I asked that both devices use the background color from the theme background because that makes more sense. They said that they won’t do that for the Fold, and to change the sub text color so that it is visible on the regular button background color!!!

Which means there are strange color combinations on the Fold that we won’t know about until a theme is rejected.