We can no longer follow up on existing tickets with 1:1 inquiry anymore. Instead of reply to the same ticket, we have to file a new ticket for each reply of the same issue and refill the form each every time. This is not an efficient way to keep track an issue.

We are trying to get this resolved for Theme Studio users. Do you have the same urgency with other 1:1 seller portal enquiries?

That’s good to know it is in the works. No, I don’t have an urgent issue right now, but I had to upload both STP and APK which has combined zip file over 100mb attachment limit. May I suggest increase the attachment size from 100mb to 200mb, as video theme file size can get quite large.

Try putting the large files on a cloud drive.

Hi Ron, there is a ticket history in the dashboard but it’s support from dashboard which is different from Seller Portal support.
https://developer.samsung.com/dashboard

I believe there are actually three areas for support…

And now PSS requires 2FA to log in which is really annoying because it is not viable for commercial accounts.

The idea of Premium Support Services was that they would be a hub for Seller Portal, Theme Studio and other Themes designer issues such as Android versions. All these support areas should be routed to PSS but I don’t know if they are.

Because of a lot of stuff going on in September and Early October I have dropped the ball on following up on this. But after SDC22 ends I will be able to bring more attention to see if things are being followed up on correctly.

Any and all feedback for me to send to the project manager would be helpful.

I used Dashboard support in August for Galaxy Theme binary issue, they said to use Seller Portal support. But Watch Face Studio tickets are being tracked via Dashboard. 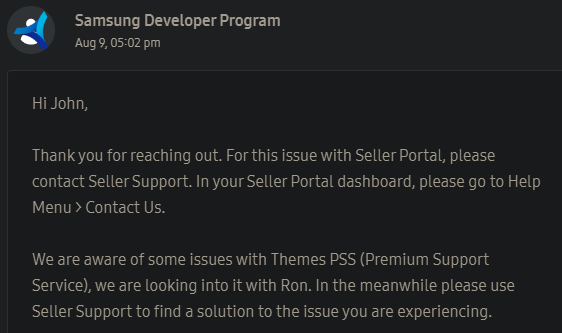 It’s kind of confusing as which one to use, dashboard support seems to be the ideal one.