I am having a very strange behaviour with short text complications. This has also been reported by users to me via email. I think there is something wrong.

I have translated what the user says and tested it he is right. After setting these 2 x short text complications on main. After few mins they disappear as shown in screen.

I have disabled each and all layers on AoD only to hide on AoD. It’s not issue on AoD. BUT the complications that should display on main whereas they disappear after some time.

Clicking on them still opens the complications that were set on positions as shown in screenshots sent to me by the user. And i cannot figure out why they disappear.

What he means and saying which i have found correct. The complications are off on AoD and that is correct behaviour.

I am also testing it on my watch 5 pro putting same complications there. Please see my screen recording
.For last 10 mins i dont see them disappear for me.

The layouts i use in short text complications are 2
Icon+ Text , Text+Title and i have hidden all elements only in AoD for each layout. 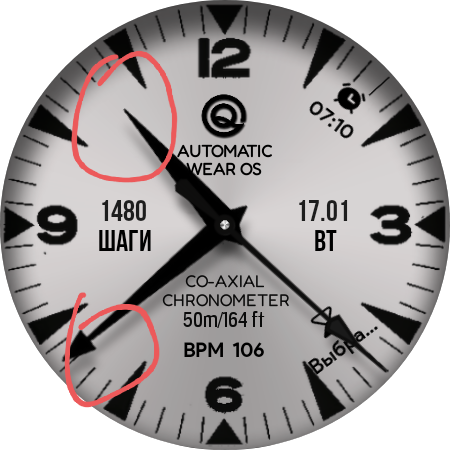 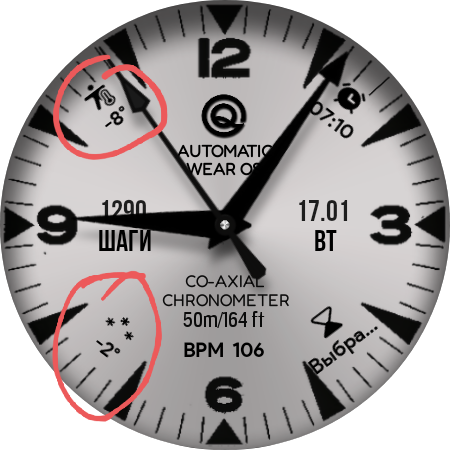 This happened to me just after i made the video above 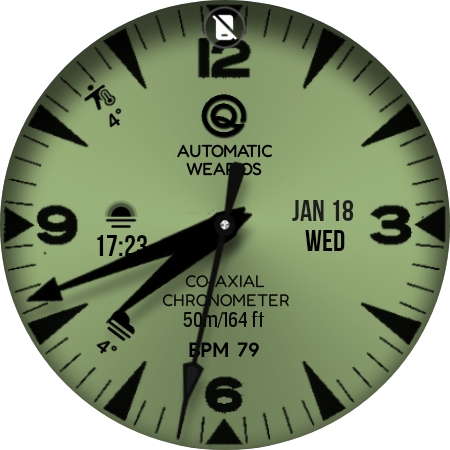 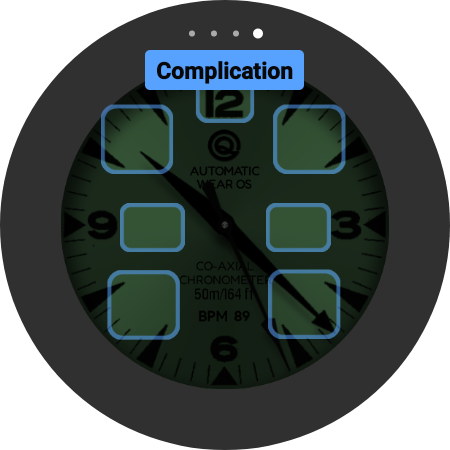 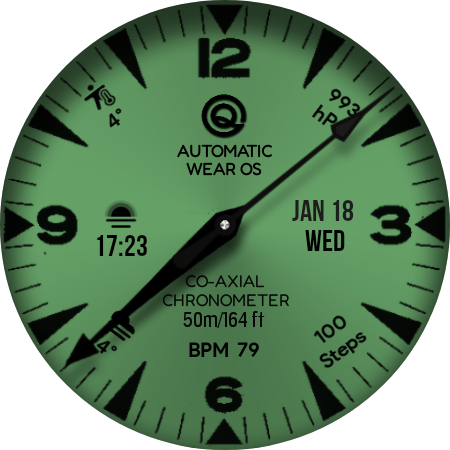 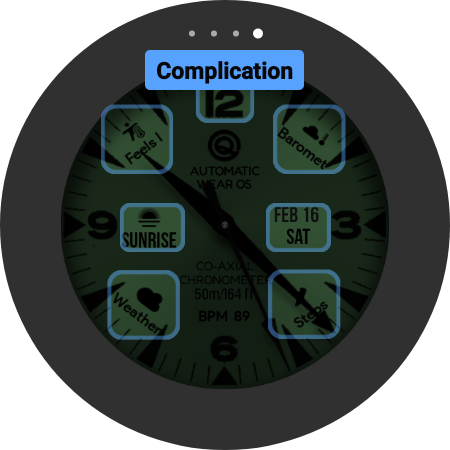 After 1 second they reappeared while staying there. I didnt change any thing during this. and made exit from customization menu The complications reappeared as shown in screenshot.

This behaviour has occurred 3 times. as soon as i go back to customizations menu and without changing anything move out of customization menu. They reappear.

I was able to catch and record this behavior as well on my watch. please see this video screen recording made on watch 5 pro.

I have a strong doubt it is occuring because in this watchface i have kept all these 4 x corner shortext compications with empty default provider in all f4 of them .

Because another watchface which im making having same layout complications doesnot behave like thos. the only difference i think at is that in new one i have not put complications with empty provider.and goruped all 4 of them

Will further investigate by making changes in diver 5.

It is a bug in latest Samsung Watchface Studio itself. Le t me also remind this issue was never there in previous versions of WFS.

The bugs i have found so far in Short text complications. which I think are serious as they are regular things used .

well when i keep the default provider empty in watchface complications on main. They start doing disappearing behavior. I have tested same watchface with all complications with providers put in wfs for main and this has not occurred even once in last 2 hours on same watch face.

The minute i change it to empty provider in wfs. They start getting invisible randomly within next 10 mins after running on watch as i showed in screen recording above. 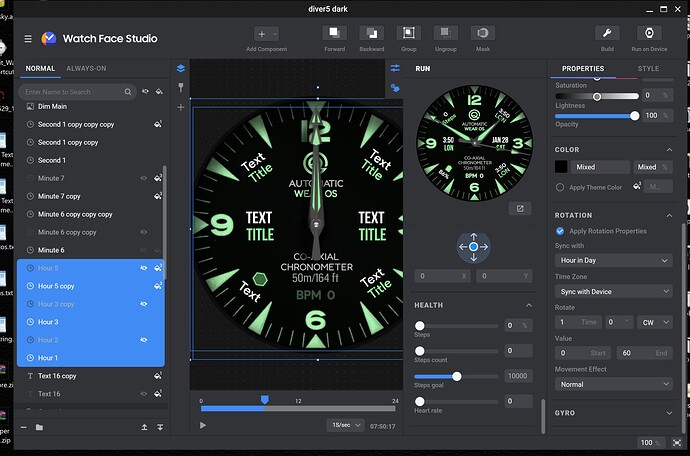 I also have another strange bug . I copied this samew watch face and after making changes when i run it . It is 1 hour behind my actual time. There are 5 layers each of hour and minutes and each of them have time set to sync with device. I checked every layer of hands .

I have checked the watchface from which i created copy it has no such issue. Can you please throw some light how this can be checked or resolved. Is there any where else in wfs project where this got changed by mistake or other reasons. seems to me some how i may have accidentally fiddled with daylight savings maybe. I cannot also seem to resolve this issue.

If we see in screenshot in wfs its showing me run time also not correct in wfs. Time shown in graphical representation is 1.50:17 where as if you look in screenshot . just below the preview image time says 7:50:17. Also on right side in rotation the hour in rotation is set to sync with device. This behavior is not on other faces or even the original wfs file copied.Only in this copy this time issue. 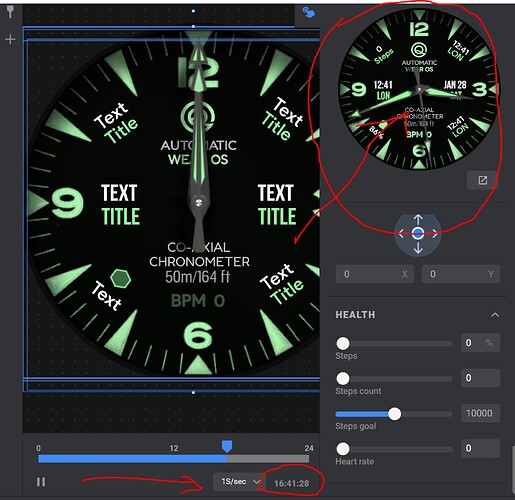 EDIT: I checked my pc time has been set to automatic. I checked again wfs and saw hands layers which i grouped together added in one of small image complication. I have ungrouped and moved it out . 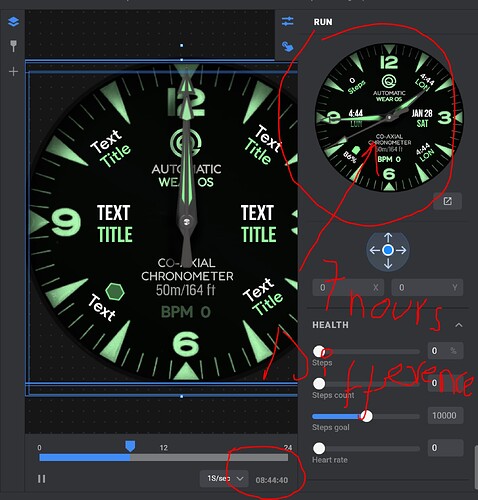 Now watch face is running fine on correct time on watch. checked my phone and time is set to auto on it as well. But when i see in wfs the time on graphical display is shown sometimes 1 hour running behind the run time. sometimes 7 hours ahead in wfs as in screenshots. I dont know why this is occuring only in this watchface copy. and unable to fix it in wfs. Since all layers have time sync to device and i cannot find any reason for this occurrence.

Maybe it’s because previously you have them set up & now you’re setting them as ‘Empty’ but you’re using same debug build.

Try settings these complications to empty. Uninstall all watch face builds from your watch. Build your apk / aab and then adb install watchface.apk to your watch and see if the same thing happens on release build.

Debug builds often rewrite each other while some caches & system complication Ids are still given. When you install new debug build, system does not know what to do… it’s empty or should I show previous complication ID?