How to fix update rejected?

Hey everyone,
I’ve been rejected by several watch faces with the reason:

I can not understand what is at stake, maybe it’s about a companion application?

Has anyone already encountered this? 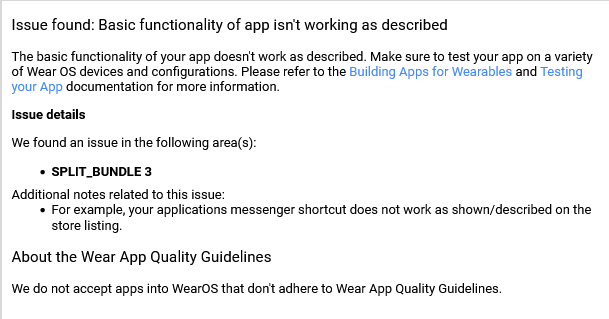 I also got this message some time ago, although everything was working perfectly.
I uploaded the same file with no changes with a new version number and it was accepted.

There seems to be an issue with the shortcut “messenger”.
Check the AD images and description.

If you have app chooser as a default complication you will may get the Split_Bundle error.

If you document it that a end user can change the complication to an App Chooser and let them set app chooser it passes. If you upload your app again with a higher version number and get a different reviewer it passes.

If you were using open custom app be sure it is one that is preinstalled on all Watches for example Samsung Health may not be installed on non-Samsung Watches. That would also give a Split_Bundle error.

I have a slightly different situation, since the watch faces are made in Android Studio.
But in general, I understood the direction of solving the problem.
it is necessary to describe in more detail the customizable shortcuts and complications.

Thank you for your help!

it is necessary to describe in more detail the customizable shortcuts and complications.

Yes that is good. For example if you did have a shortcut that opened Messenger be sure to describe it as needs to be installed. My understanding is that in the old Wear OS it would ask if missing if you wanted to install it, but I don’t think that happens now or doesn’t work for reviewers.

Apparently incompetent testers again got down to work on checking for compliance with the Wear OS rules.

Some kind of madness.

PS:
As far as I understand, initially Wear OS testers only checked the watch face when it was first added to the catalog.
And now they are also checking watch face updates.

I am also getting a second update denial for the same reason.

It doesn’t make any sense.

I wonder if this is a new thing. I submitted a watch face in July and it was accepted. I realised it had an error in the shadow effect and made that one tiny graphical change, and it gets rejected with this: 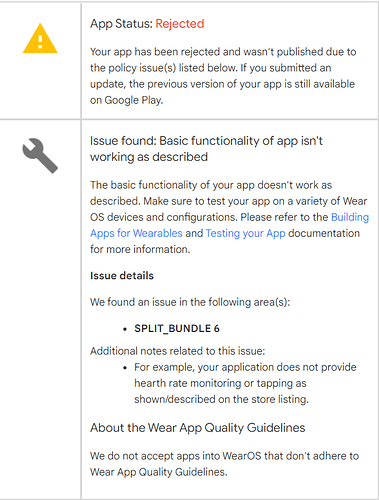 And to clear, my watch face only shows the heart rate for about 10 seconds after retrieving it since we don’t have real time data, I clearly hide it once it’s no longer a current reading as is best practice.

Short rant… My watch was approved. No problems. Needed to update the images after an update. No problems, approved again. Then I noticed a typo in the description. Got approved again, no problems. And then I saw another typo (I know I know, better check hundred times)… REJECTED! The problem was my warning (I guess) that I typed it all capitals. Approved 3 times, 4th one, rejected. Ok, rant over.

"IMPORTANT! The watch face’s heart rate measurement is not linked to any health apps… "

I am also getting a second update denial for the same reason.

It doesn’t make any sense.

Do you have an action for Open App or a custom App? Check your images and make sure everything that shows is fully compatible on all Wear OS 3 devices.

My guess is there is a new reviewer that knows about this issue and flags everyone incorrectly.

And it continues. It got rejected 3 more times last night. At least they were pretty quick about it. Now the problem is square images which was not a problem before.

Just a comparison, another update was pending that was also rejected because of square screenshots. I did add one the same time with my other one and that got approved overnight.

I’m not saying they shouldn’t reject but do it consistently.